Dragons in the Hills: Music and Myths by the Fireside 4 - with Seamus Murphy, and music from Colleen Savage and Padraig Carragher 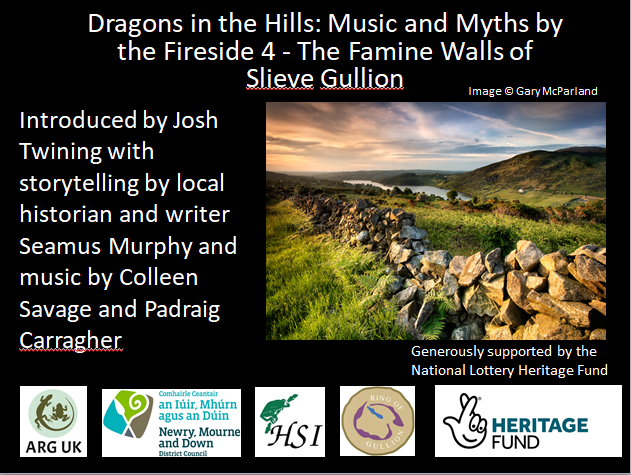 Introduced by Josh Twining, with storytelling by local historian and writer Seamus Murphy, and music from Colleen Savage and Padraig Carragher. A key part of our Dragons in the Hills, National Lottery Heritage Funded project is to use the creative arts, and storytelling to bind the world of myth and legend with the natural world, allowing our little dragons to take us on a journey of wonder and magic, to help us to understand and cherish this mysterious ancient landscape. As well as its fabulous musical heritage, South Armagh is steeped in storytelling - rooted in ancient times when the first peoples lived in this part of Northern Ireland, and continuing to the present day.

In the fourth of our Music and Myths series, we find out more about how one of the landscape features so beloved of our common lizards, the Famine Walls that cross the landscape of Slieve Gullion and the Mourne Mountains, were created. Local historian and writer Seamus Murphy, tells us about the widespread famine and fever resulting from the potato blight of the 1840s and how controversially, the scheme of encouraging starving and sick people to walk up a mountain and spend ten hours of hard labour building a wall was deemed to be a means of helping local people to 'get back on their feet'. Seamus describes the painful and  distressing events that led to this, and the lengths that desperate people were prepared to go to, to try and save their families. He also tells of the kindness of others - including unexpectedly the Choctaw Nation, themselves a displaced people. Finally, we hear from local musicians Colleen Savage and Padraig who set traditional music to the stunning drone footage of Slieve Gullion by Matthew Magilton.

This recording has been generously supported by: