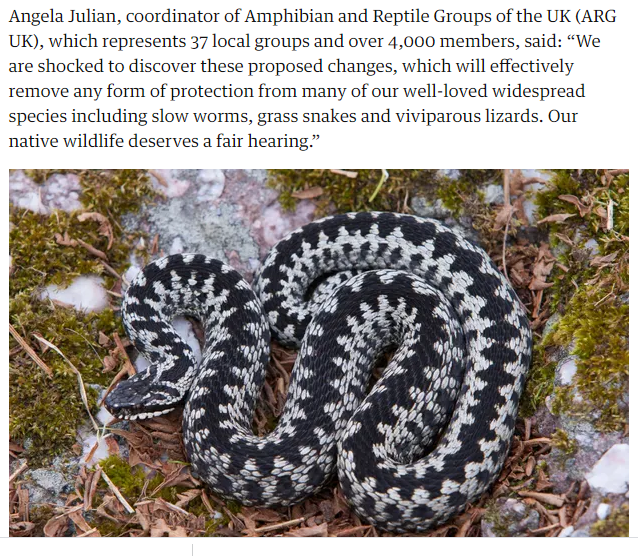 January 2022 - ARG UK are one of 49 signatories to an open letter to the JNCC that was sent on 28.01.22 expressing our continued concerns about the proposed changes to the Wildlife and Countryside Act (1981) and the impact of these changes on our native wildlife. The good news is that we have also commented on the latest online QQR 7 Stakeholder Consultation, which for 'our' species recommends that we 'retain' existing levels of protection for all except northern adder where we support the recommendation for a 'regrade to full protection'. This recommendation is based on its vulnerability as a species as evidenced by widespread declines in the past decades (see also Make the Adder Count) and potential for persecution.

document The full letter can be downloaded here (29 KB)

Re: 7th Quinquennial Review (QQR) of Schedules 5 and 8 of the Wildlife and Countryside Act (1981)

We are writing this open letter in response to the consultation about proposed changes to the eligibility and decision criteria to determine which species will be included on Schedules 5 and 8 of the Wildlife and Countryside Act 1981 as outlined in the 7th Quinquennial Review (QQR7) consultation document.

Since our previous letter sent in June 2021, we appreciate the extension made to the consultation period, the initiation of stakeholder meetings, the subsequent amendments made to the QQR7 proposals and the broadening of the consultation to include the eligibility and decision criteria. However, we stand by our original objections, notably that the definition of endangerment within the eligibility criteria must not be narrowed to exclude Vulnerable (VU) species.

Limiting the criteria to CR and EN species, and then making a series of ‘special cases’ for retaining selected species categorised as Vulnerable, Near Threatened and Least Concern, presents an inconsistent rationale that undermines the Red Data listing system. For example, the list of species proposed for retention on Schedules 5 and 8 includes 74 (roughly 25%) that would not meet the new eligibility criteria; this inconsistency surely weakens the argument for changing the criteria.

Whilst the eligibility criteria appear to identify species based on their conservation status and need, the proposed changes to the decision criteria will limit applications that have any positive conservation impact. The suggested definition of ‘place of shelter’ for animals appears to narrow the scope for interpretation of a species’ needs to survive:

We would like formally to state our joint position that the proposed changes to the eligibility and decision criteria as defined for the 7th Quinquennial Review (QQR7) for adding species to Schedules 5 and 8 of the Wildlife and Countryside Act 1981 are not fit for purpose. If adopted these changes would inevitably weaken efforts to address the current Biodiversity Crisis and undermine the new aims of the Environment Act in England. We urge you to adopt a new approach that is unambiguous and supportive of efforts to reverse declines in biodiversity broaden these rather than making cases for exceptions.

We await your response.

29.07.21 - Response from Professor Colin Galbraith, Chair, JNCC - Please find attached a reply to your letter regarding the 7th Quinquennial Review (QQR) of Schedules 5 and 8 of the Wildlife and Countryside Act (1981).

22.07.21 - From the Wildlife and Countryside Link -  a note of the recent eNGO meeting with JNCC regarding the seventh quinquennial review. It was a constructive meeting, with JNCC making reassuring and collaborative overtures, but no definite conclusions to share yet. There will be a series of follow up meetings throughout the process with the next in mid-September, where we hope to get down to some of the technical nitty gritty.

26.06.21 - Amphibian and Reptile Conservation have set out the case for amphibians and reptiles here

03.07.21 -  We have jointly published an open letter dated 28.06 21 from 35 UK-based wildlife NGOs setting out concerns about the change to the  eligibility criteria for which species will be included on Schedules 5 and 8 of the Wildlife and Countryside Act in 2021.  This is also described in the attached press release.

23.06.21 - A template for a letter that could be sent to MPs or other representatives to raise awareness of the impact of the the 7th Quinquennial Review (QQR) of Schedules 5 and 8 of the Wildlife and Countryside Act (1981)

You can find your MP here

What is the 7th Quinquennial Review?

Every five years, the statutory nature conservation bodies for the United Kingdom (Natural England, Natural Resources Wales and NatureScot) review Schedules 5 and 8 of the Wildlife and Countryside Act (WCA) 1981. This is coordinated by the UK Joint Nature Conservation Committee (JNCC). This review provides recommendations to the Secretary of State for the Environment, Food and Rural Affairs and to Ministers for the Environment in the Scottish Government and Welsh Government for changes to these schedules.

pdf We have also summarised this in a 2 page document that can be downloaded here: (67 KB)

What is changing - the new Eligibility Criteria

Under the new criteria, the country-based nature conservation bodies will only pursue scheduling of a species when an animal or plant is in danger of extinction in Great Britain.

Why this is important!

Schedules 5 and 8 of the WCA focus on species endangerment, and selection will preferentially consider GB Red Listed species, i.e.  those facing imminent threat of extinction (IUCN 2012) in GB.

This means that species where there is no evidence of decline, or have not been assessed against the IUCN national or regional Red List Criteria are not considered.

Under the new criteria they will be removed unless there is clear objective evidence of declines!!

In our opinion this could have the following impacts:

We believe this could lead to local extinctions of some of our widespread species!!

All of our ‘Critically Endangered’ species will be automatically recommended for scheduling without needing to meet the Decision Criteria. European Protected Species (EPS) are automatically proposed for listing on the schedules in England and Wales, and will continue to be protected under the Habitats Regulations in Scotland.

As a part of the review stakeholders are given an opportunity to comment or suggest changes. These can be made via an ‘Information Pack’ – where you can access specific surveys for ‘addition’, ‘removal’, or ‘change in status’ of specific species. This must be evidence based – so if for example you wanted to add ‘adder’ you would need to cite published evidence of significant adder declines. Or you can email your country representative directly.

The target date for delivery of the QQR 7 is December 2021.

Important dates and the phases of the review are: