Adders are (even more) Amazing - Fun facts and top tips!! 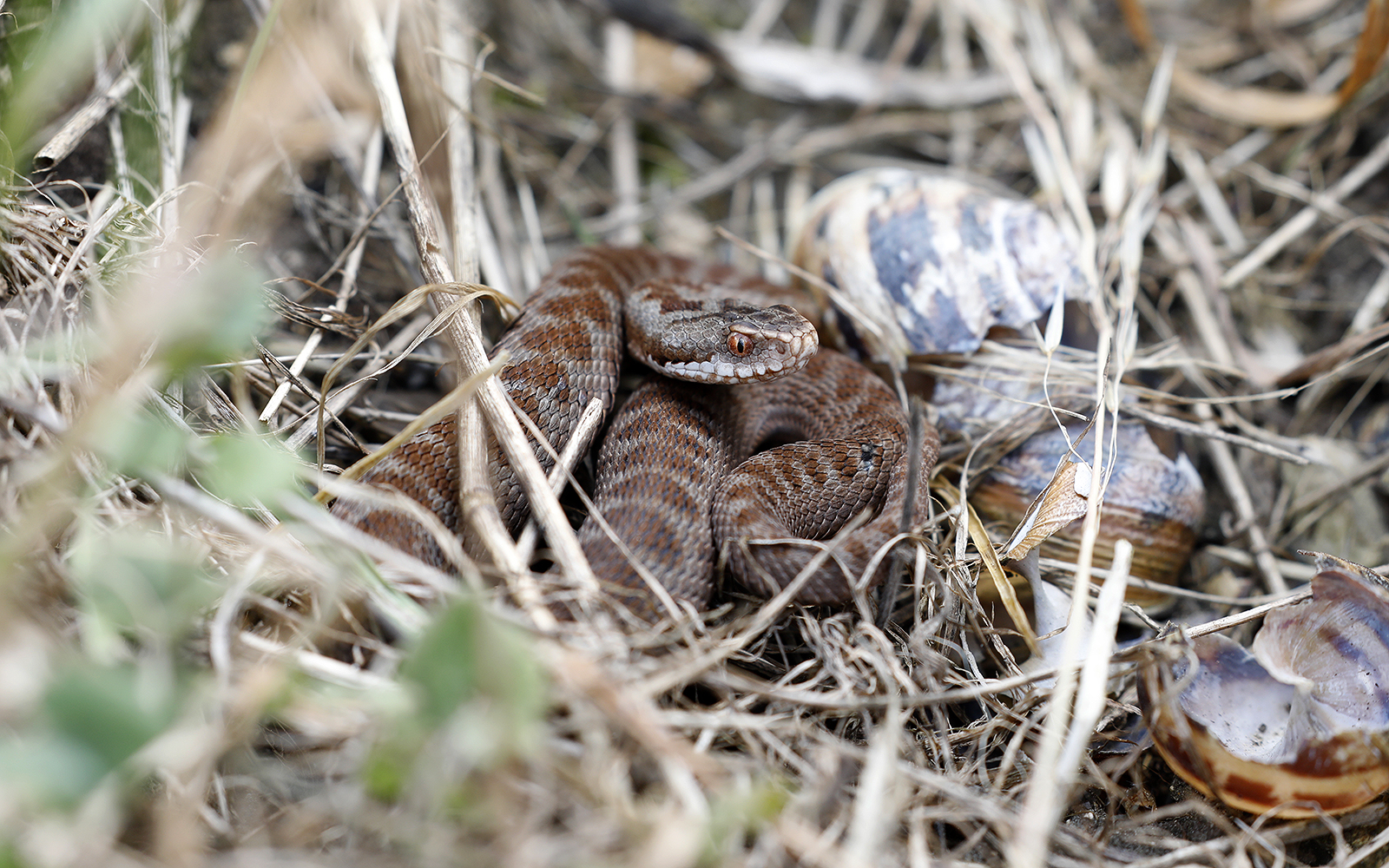 Welcome to our adder resource page! Lots of fun facts and top tips about our iconic native adder and more about a very special outreach project 'Adders are Amazing!' 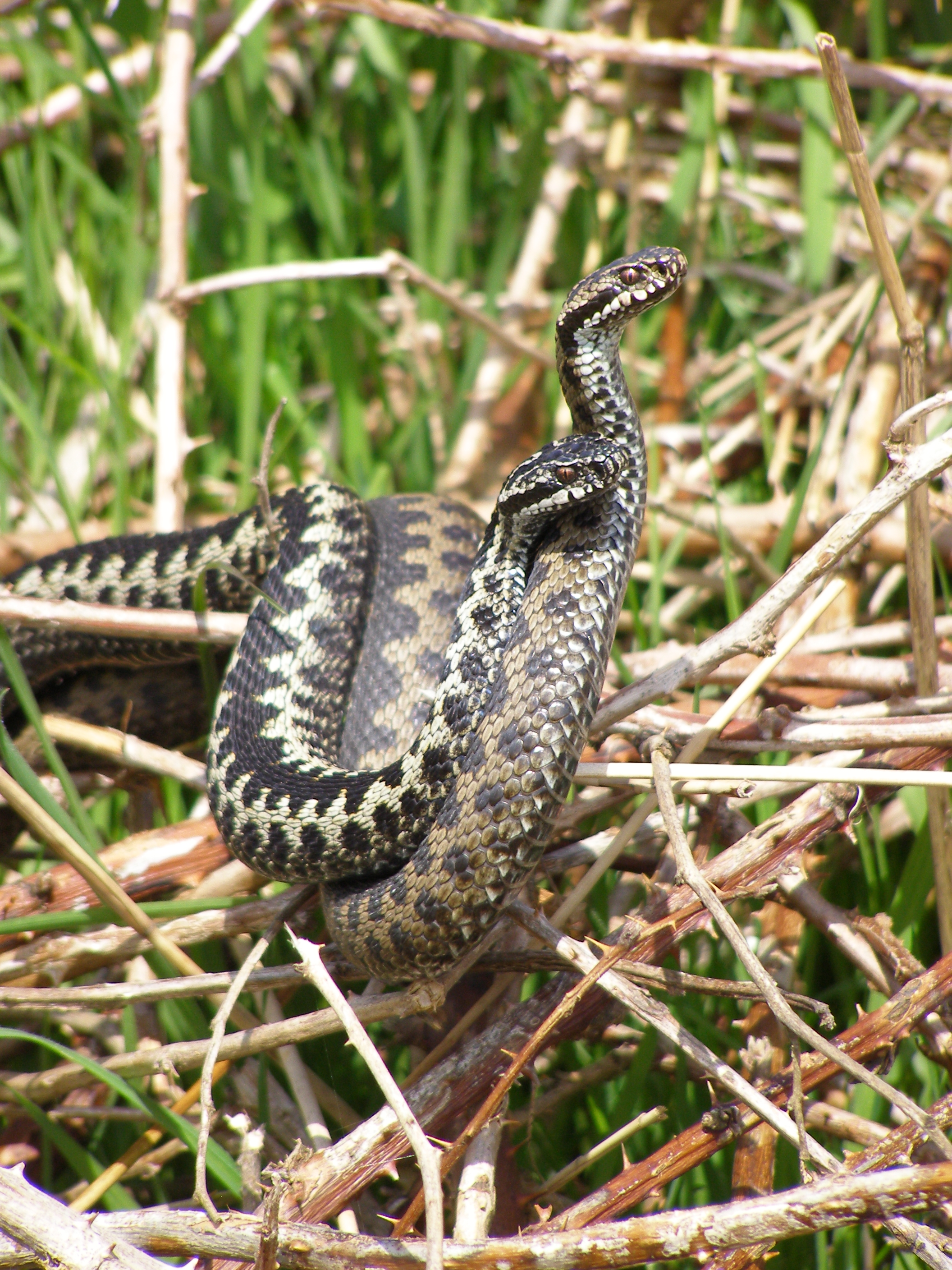 Adders emerge from hibernation from early spring, if the weather is mild, and the males can be spotted from January (in southern England and West Wales) or February-March (elsewhere). Emergence is followed by basking or ‘lying out’, often very close to the hibernation site, which can last for several weeks.  This is an important time for the males, which need to bask in preparation for successful mating, and it is essential that they are not disturbed at this time.  Following the lying out period, males shed their skin (slough), after which they become much more active, looking for females and eventually mating.  If you are lucky you might see two male adders 'in combat' - sometimes called the adder dance. But really they are competing to see who is the strongest and will impress the females.

Females slough around a month later, and both sexes slough again later in the summer.

A dominant male may mate with several females during the spring. Gravid (pregnant) females are relatively sedentary and spend the summer basking before giving birth to 3-18 live young during August and September. Birthing areas should be undisturbed from late spring through to late summer, as females are particularly vulnerable at this time.

Adders can remain active through to late October or early November in southern parts of the UK, although the activity period is much shorter in the north of Scotland. Mainly a diurnal species, adders are most often active during the day, but may also be active at night during very warm weather.

Although some adders can move over distances of up to 2km through the year, other animals may move no more than a few tens of metres, and can be very site faithful.  Adders return to their traditional hibernation sites in late summer, and this is often where the females give birth.  This high degree of site fidelity is one reason why hibernation and birthing sites are critical to managing habitat for adders. (Photo - adders in combat, copyright Jon Cranfield).

Where do adders live?

Adders can live in open heathland, woodland, moorland, rough pasture, coastal areas, alpine rocky slopes, and in some places they can even be found in semi-desert conditions. They are incredibly tolerant of the cold and are found all the way up to the arctic circle.

Adders prefer to bask on slopes with a southern aspect or that have lots of sheltered, south facing microclimates that can catch the sun, and they prefer well-drained soils. They like a diverse or ‘mosaic’ vegetation structure, where small glades or open areas are adjacent to the safety of bramble, gorse, heather or scrub cover. They are usually spotted on habitat edges or transitional zones, for example on the edge of a woodland ride, tucked under a hedgerow or dry stone wall, or basking on a bracken or heathery bank.

Like other reptiles in the UK, adders hibernate during the winter in bracken banks, piles of brash or old tree stumps. They often hibernate as a group in the same place every year, so if a favourite bank or stump is destroyed or flooded then the local population may find it very hard to survive over the winter. 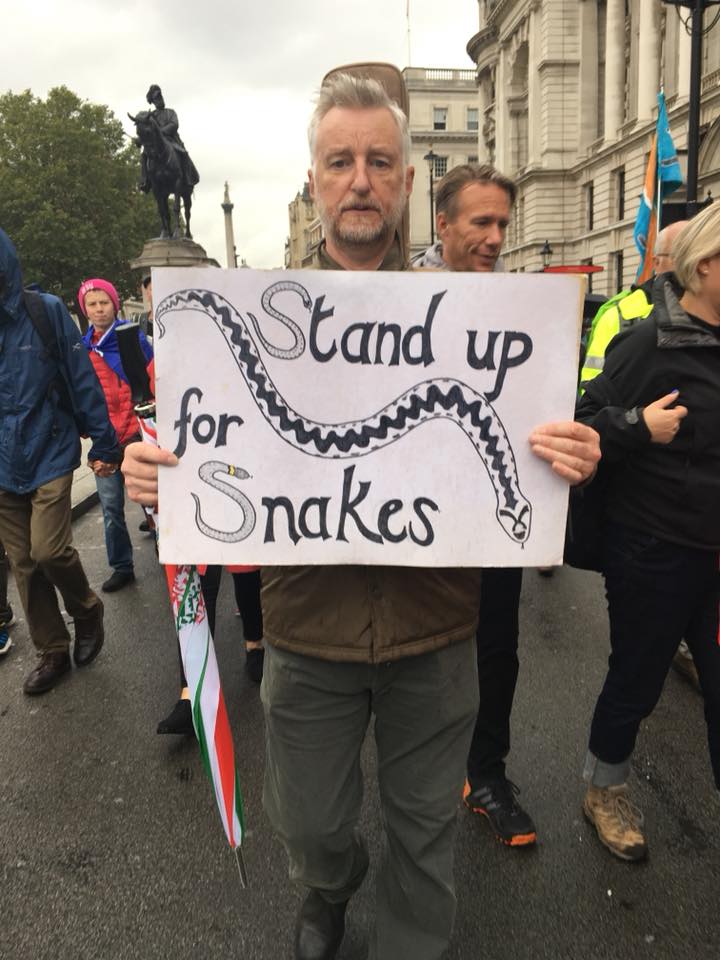 In the UK,  the adder has declined dramatically since the mid part of the 20thCentury. Whilst still relatively widespread in some parts of the UK, in many other areas, particularly central England, populations comprise isolated groups surviving in fragmented pockets of habitat.  These small populations are vulnerable to local extinction. In some counties including Oxfordshire, Warwickshire, Cambridgeshire and Nottinghamshire adders are already extinct.

Adder declines are due to a number of causes, primarily habitat loss, but also: persecution, predation, disturbance and burning their habitat.  Agricultural intensification and commercial forestry are some of the biggest direct causes of adder habitat loss, and adders have suffered more than other reptile species because they have restricted habitat preferences and are less able to colonise new locations.  In addition, despite some changes in attitude, adders are still sometimes deliberately killed, even though this is illegal, further diminishing already small and fragmented populations.  Adders also appear to be sensitive to repeated disturbance by recreational site users and photographers.

Even on protected sites adders may struggle, as many standard habitat management practices do not favour them.  In some cases, unsympathetic habitat management, particularly removal of hibernation sites, over-grazing, burning and extensive scrub management, can lead to severe declines and local extinctions. Conversely, lack of positive management, leading to degradation of key microhabitat features, may also negatively impact upon adders (photo copyright Angela Julian).

An exciting project, led by our Pembrokeshire Adder Coordinator, Sam Langdon, delivered the ‘community engagement’ aspect of a wider programme to prevent this iconic, but vulnerable native snake from slipping into extinction in large parts of England and Wales. The project took a holistic approach, looking at all aspects of conservation, including: survey and monitoring, which fed into landowner engagement and practical conservation. However, a key part of this programme was also public perception; adders have been persecuted over many centuries, and without a significant change in the way in which communities and the wider public view the adder, there is no desire to conserve them. The project developed an inspirational programme to engage the wider community and general public and reverse the effects of the negative publicity that adders have received over so many generations. 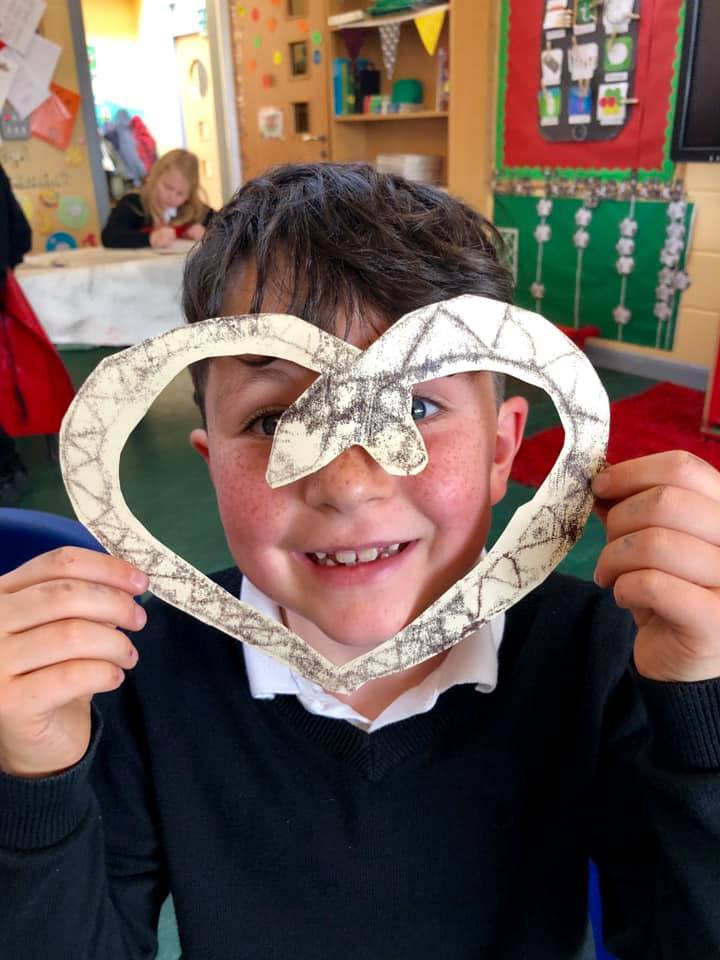 Adders are Amazing! worked with communities on the St David’s Peninsula, one of Wales’ key strongholds for the adder. Alongside partners from: PembsARG, Pembrokeshire County Council, the National Trust, Pembrokeshire Coast National Park, Keep Britain Tidy and Dr Beynon's Bug Farm; we have worked with the community and local schools around the St Davids peninsula, to create a positive focus on the natural environment, with the adder as its flagship. This will help ensure a resilient future for adders in this area and help develop a sense of community pride in this beautiful, sensitive species. The findings and outcomes from the programme will then be used to inform further projects across Wales, UK and Europe to help reverse the pervasive negativity associated with adders and other native snakes.

In the first year of the project Sam Kelly (Langdon), our Pembrokeshire Adder Coordinator worked with nearly 2,000 people, from all sectors of society, in a range of innovative and creative ways, to spread positive messages about our native adders, and ensure that the community will continue to cherish them for future generations to enjoy (Image copyright Sam Kelly). 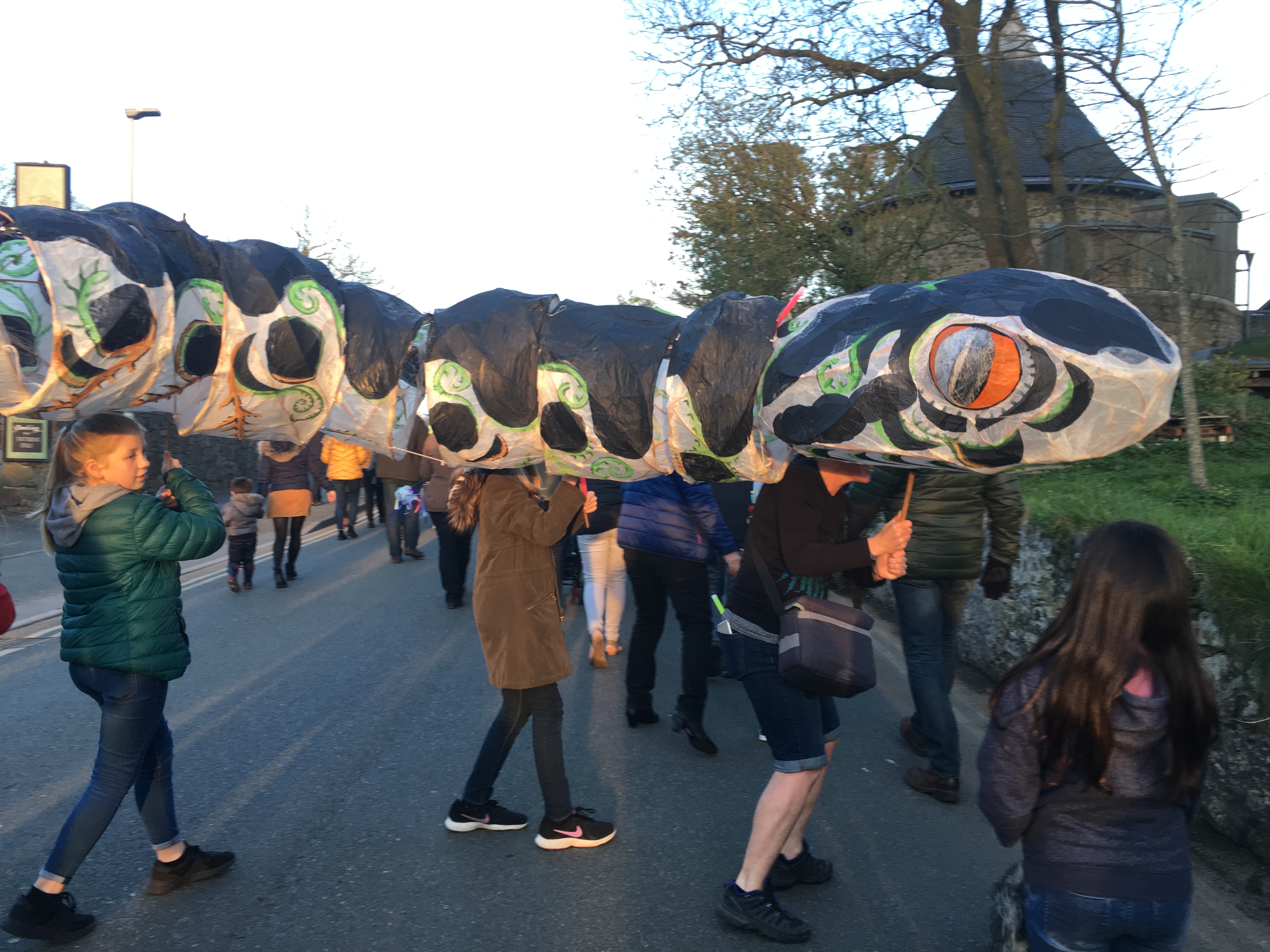