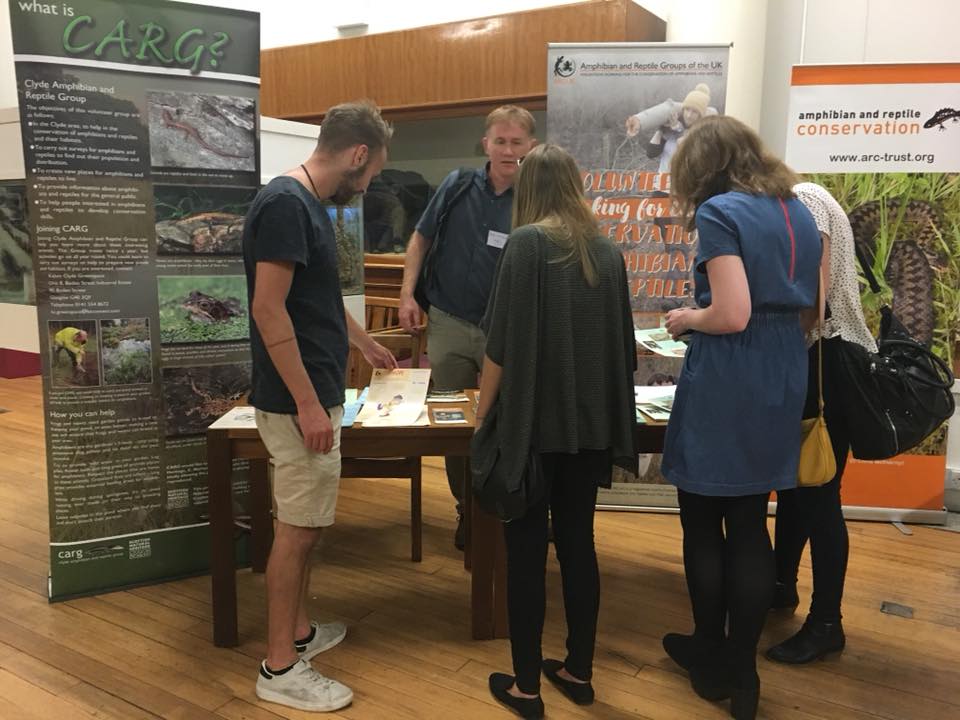 On Saturday 9th June, herpetologists from all over the UK gathered in Glasgow for a very special occasion. The Glasgow Natural History Society, in conjunction with Clyde ARG, had organised a fantastic line-up of herpetologically themed talks for a one day conference, ‘The Amphibians and Reptiles of Scotland: Current Research, Future Challenges’.  One of the main driving forces behind this special meeting, was the publication of, ‘The Amphibians and Reptiles of Scotland’ a brand new book, co-authored by Chris McInerny of Glasgow University and Pete Minting of ARC and published by GNHS.  For those of you who were unable to attend the day, you missed a great speaker line-up covering all aspects of amphibian and reptile conservation and ecology in Scotland (and beyond). The whole day was thoroughly enjoyable and the best part was that it was free! Even the journey, from London to Glasgow, was both speedy and pleasant, and I’m certainly happy that I made the trip.

My favourite talk of the day was given by Dr Silviu Petrovan of the University of Cambridge, based on his work whilst at Froglife. The talk was on how effective road mitigation schemes are for amphibians and reptiles, and provided an overview of a number of different projects with a measure of their success. Whilst I knew that roads had a major impact on amphibian mortalities, what I didn’t know was how ineffective many of the mitigation strategies are at maintaining the populations of the species they were designed to support. With this in mind, it was also good to hear presentations by Chris Cathrine and Chris McInerny which both highlighted successful mitigation strategies for unconventional development sites. Despite the fact that mankind has been observing the wildlife in ponds for many years, it is clear that we still know little about the creatures that inhabit these watery worlds, and there is still much to discover and investigate. This is particularly true for Scotland, with its rugged terrain and remote populations of both reptiles and amphibians.

Even though Christmas normally only comes once a year, on the 19th June there was a second conference, with herpetologists from all over Europe travelling to Peterborough for Froglife’s 2018 ‘Toad Summit’. The driving force behind this one day meeting was a recently published scientific paper based on the decades of painstakingly collected toad patrol data, demonstrating that the common toad has declined in the UK by 68% over the past 30 years. This is of course very startling, and appears to have happened under everybody’s noses. Whilst there are number of reasons for this decline, I think Jules Howard hit the nail on the head when he spoke about common amphibian and reptile species often being overlooked when an area is being developed, particularly in relation to habitat connectivity (especially joining up ponds and terrestrial habitat!) This is very true of common toads (which should probably be renamed as uncommon toads) which were once a BAP species, and may also need some additional legal protection to help them recover to their former levels.

In my opinion, the best talk of the day was that given by none other than Tariq Stark of RAVON, in the Netherlands. Tariq’s talk was on a topic which thankfully doesn’t affect many British toads, but is common in the Netherlands, and that potential threat is toad fly. It was quite a gory presentation and placed just after lunch which made it even more fun. The causal agent is a species of fly (Lucilia bufonivora) which lays its eggs on the bodies of live toads. After the eggs hatch, the maggots migrate to the nasal cavities of the toads where they start to eat the flesh and soft tissue of the head of the toad. All of this happens whilst the toad is still alive and the results can be pretty gruesome. Whilst in the Netherlands the flies seems to like sites with sandy soils, their distribution in the UK isn’t well known, so further reports and specimens are needed to fully understand this. If you find evidence of toads with toad fly, then please do submit them to the Garden Wildlife Health Project. 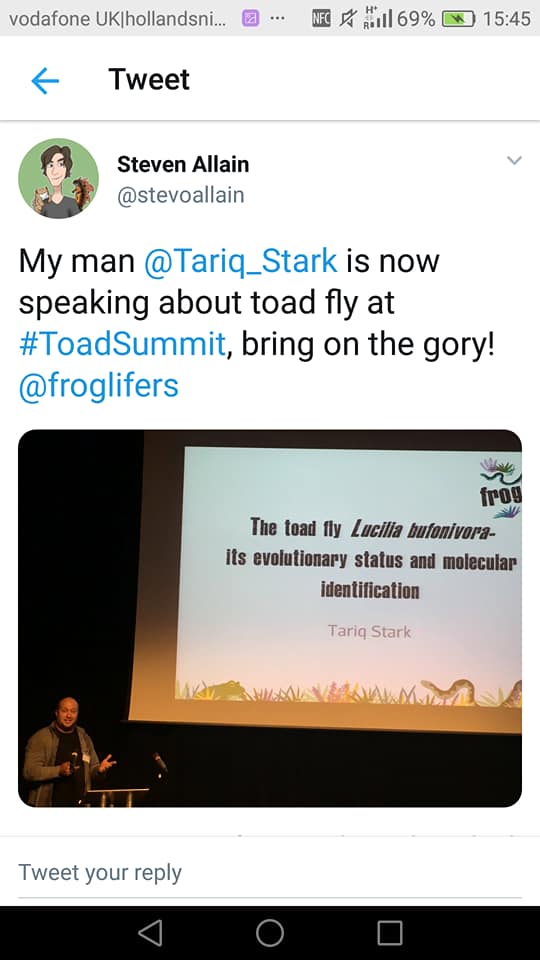