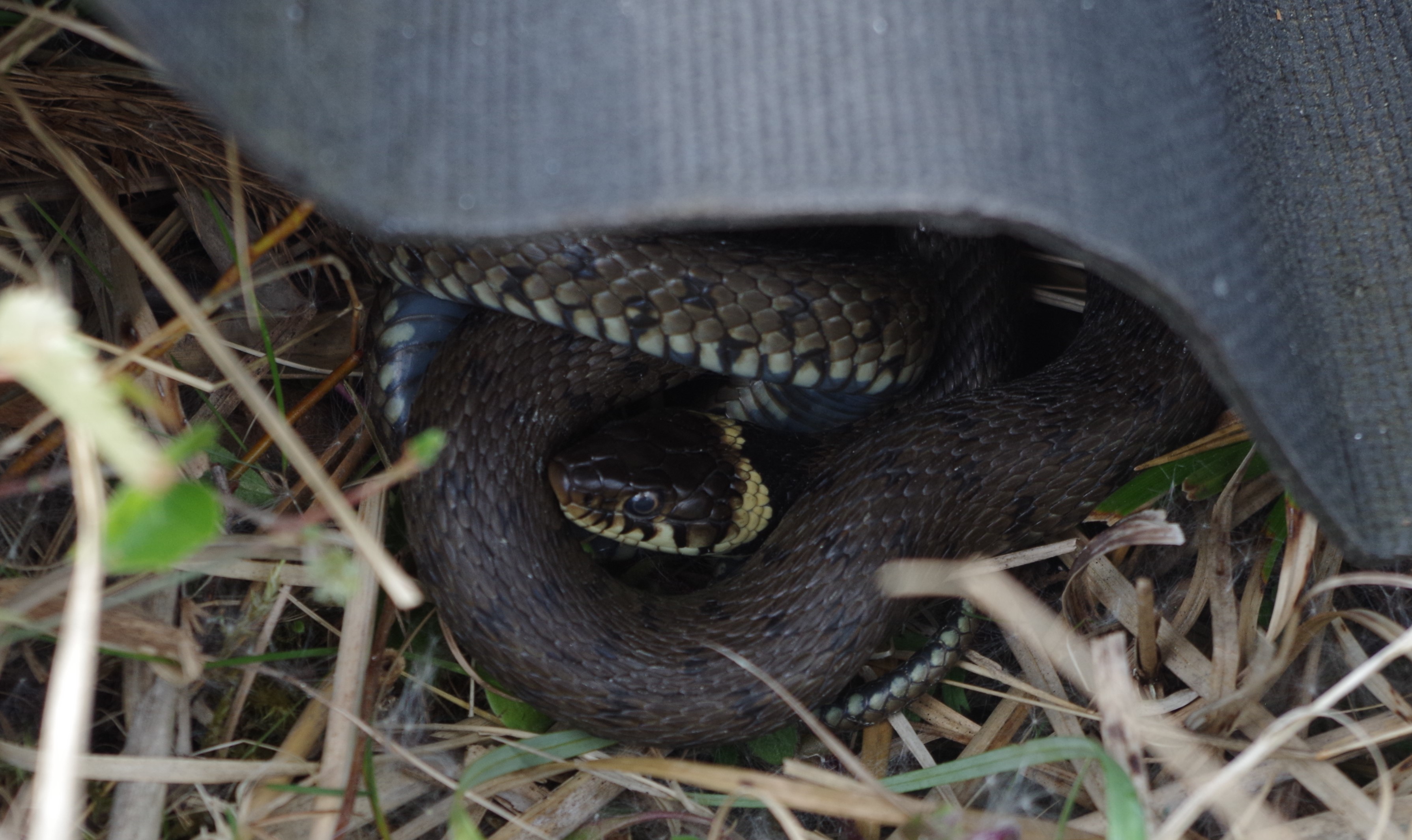 As winter inevitably gives way to spring, I’ll soon be getting ready to return to my field site in Norfolk for the final year, to collect data for my PhD. For the past two summers, I’ve been busy chasing my target species the barred grass snake (Natrix helvetica) to find out more about their population dynamics. Despite barred grass snakes being a widespread and fairly common species, they are severely under-studied compared to our other reptile species. Personally, I feel that this is a consequence of the rarer species being more attractive to funding bodies and therefore more likely to gain research funding. Aside from myself and ARG UK Trustee John Baker, there aren’t many other people out there studying barred grass snakes within Great Britain. I’m fortunate enough to have been involved with projects relating to grass snakes through the Cambridgeshire and Peterborough Amphibian and Reptile Group (CPARG), prior to undertaking my PhD on them.

As our largest snake species and one that is thought to be a main predator of amphibians, it surprises me that more research is not being undertaken, as there is clearly an overlap with barred grass snakes and a lot of other projects being completed by various ARGs. One of the more complicating factors is that recently the barred grass snake was elevated from subspecies level, to species level through the use of modern molecular methods. By comparing certain parts of the mitochondrial genome, researchers were able to tell that those grass snakes found in Italy and west of the River Rhine were a different species to the European grass snake (Natrix natrix). When this was reported in the media, shortly before I started my PhD, it caused quite a bit of confusion. Every grass snake you’ve ever seen in Great Britain is the barred grass snake, unless you’ve been lucky enough to observe grass snakes from one of the introduced populations from Eastern Europe, which would make them European grass snake. I think most of this confusion has been caused as although Natrix natrix is the old name we used for the grass snakes on our shores, it now applies to a completely different and non-native species.

Why have I mentioned this you ask? Well, as a researcher I need to review the scientific literature and understand where research has been completed before and what the results were. The problem comes when trying to gather information on a species shortly after such a taxonomic split, as many of the previous publications no longer apply to the species you are studying and as a result the pool of information regarding barred grass snakes became smaller. Whilst some of this information may allow you to make inferences, the ecology and life history of closely related species can often be different. I am hoping that my research will help to fill some of the major gaps, although there are still many questions out there that we don’t have the answers to. Some of these could easily be addressed through long-term monitoring at other sites to help provide a more regional or national overview.

If you’re thinking about monitoring a grass snake population as part of your ARG’s activities, I’d highly recommend it, as we currently have little data on the state of populations nationally. Given that suitable habitat, particularly egg-laying sites, are constantly being lost and amphibian prey such as the common toad are declining, grass snakes are also likely declining.

When undertaking a population monitoring project, it’s nice to know who is who. Thankfully, grass snakes have unique belly markings which can help you to differentiate individuals. This can be helpful in estimating the population size, among other things. To support this, John Baker and I recently published a note in the Transactions of the Norfolk & Norwich Naturalists’ Society which can be found here. This highlights our preferred method of using belly scale markings over long time periods to reliably recognise individuals, as well as highlighting a few factors that you should look out for. We hope that techniques such as this will help the ARG community to establish more barred grass snake monitoring projects around the country, helping to plug those holes in our knowledge along the way.

by Steve Allain, PhD Student, The Durrell Institute of Conservation and Ecology, University of Kent