Europe’s wild snakes could face a growing threat from a fungal skin disease that has contributed to wild snake deaths in North America, according to an international collaborative study, led by conservation charity ZSL (Zoological Society of London) alongside partners including the U.S. Geological Survey. The new study is published in the journal Scientific Reports.

Caused by the fungus Ophidiomyces ophiodiicola, snake fungal disease (SFD) can lead to symptoms including skin lesions, scabs and crusty scales, which can contribute to the death of the infected animal in some cases.   SFD was first recognised in wild snakes in eastern North America around a decade ago. Prior to this study, the only wild populations found to be affected had been those in the central and eastern United States.

Now, an analysis of samples collected from wild snakes in the United Kingdom and the Czech Republic between 2010-2016 has confirmed the presence of the pathogen and SFD in Europe for the first time.  While the disease poses no known risk to humans or livestock, scientists are calling for further research to fully understand the significance of SFD to Europe’s snake populations.

Lead author and wildlife veterinarian Dr. Lydia Franklinos said: “Our team at ZSL found evidence of SFD in grass snakes (Natrix natrix) from the UK and a single dice snake (Natrix tessellata) from the Czech Republic. The analysis found that the fungus strains from Europe are different to those previously identified in North America – suggesting that rather than being introduced across the Atlantic, or vice versa, the disease could have been present below the radar in European snakes for some time.

“Of all terrestrial vertebrate wildlife, we probably know least about health conditions that affect reptiles such as snakes, so this study represents an important milestone and one that will hopefully encourage greater focus in understanding the threats facing these animals.”

Dr. Jeffrey Lorch, a microbiologist with the USGS National Wildlife Health Center and the study’s co-author, said: “The fungus that causes SFD is already known to occur across the eastern half of the U.S. and infect over 20 species of snakes. Comparing how SFD affects wild snakes on different continents may help us pinpoint the factors causing the disease to emerge and help managers identify mitigation strategies.”

To find out more about this novel pathogen in UK, download the fact sheet from the Garden Wildlife Health Project or the full paper here, which is open access and published by the Institute of Zoology. 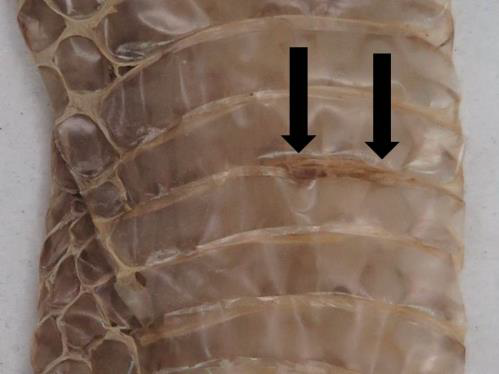