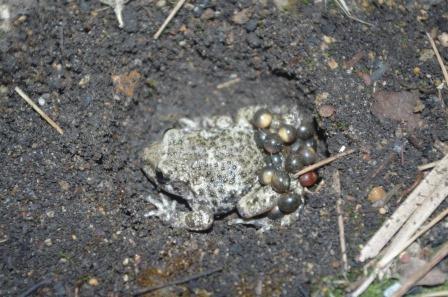 Throughout 2016 and 2017 the Cambridgeshire and Peterborough Amphibian and Reptile Group (CPARG) has been monitoring a population of the non-native midwife toad (Alytes obstetricans). As a part of this programme, the animals encountered were swabbed for the amphibian chytrid fungus (Batrachochytrium dendrobatidis) which has been associated with the decline of amphibian species globally. The results from the first batch of these swabs were received from the Institute of Zoology at London Zoo, who analysed the samples. Thankfully, we are pleased to report that all the samples came back negative for both B. dendrobatidis and a second species B. salamandrivorans, which has been associated with mass die offs of wild fire salamanders in the Netherlands, Belgium and other parts of northern Europe  Although these preliminary results can be celebrated, the animals tested only represent a small proportion of the current population. Further testing of swabs from other individuals will help to build a better picture of the disease dynamics of the species.

During the 2017 season a larger number of midwife toads were successfully swabbed for both species of the chytrid fungi. A total of 29 toads and 4 tadpoles were tested and thankfully once again, all samples came back negative. A larger number of tadpoles would have been sampled but unfortunately we were limited by the size of our swabs, only being able to fit them in the mouthparts of the largest individuals.

Looking forward to 2018 we will continue to swab the Cambridgeshire midwife toads for the two chytrid species, and we also hope to expand this preliminary disease screen to Ranavirus. We will also have some exciting news, as we've been carrying out a genetic analysis of the toads to establish where they originated from, and we are hoping to be able to share this information with you soon.

CPARG would like to thank the ARG UK 100% fund for a small grant which made it possible to have the 2016 swabs analysed at IoZ, and our generous crowdfunder backers (from our recent campaigns) for supporting us and allowing for the testing of our most recent batch of chytrid swabs. 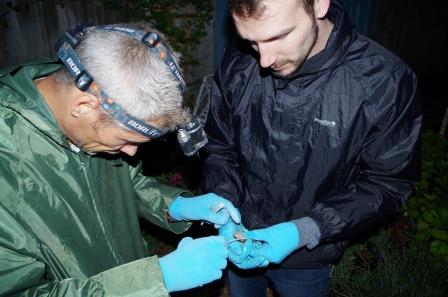