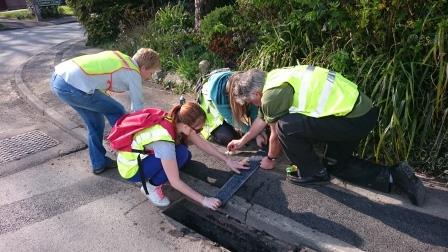 On a rainy night in early March 2015, Warwickshire Amphibian and Reptile Team (WART) members went to check out roads in Balsall Common, Solihull for amphibians and found approximately 20 common frog and around 10 smooth newts on the roads, many of which had been run over whilst migrating back to their breeding ponds. Residents mentioned that about 20 years ago, many more frogs were seen crossing during spring, but apparently numbers have been decreasing in recent years. Several of the amphibians were found trapped in the gully pots along a number of roads in the local area, in particular close to ponds and ditches.

We were aware of 'Enkamat', a strong material used to prevent soil erosion on steep banks, and had recently purchased a roll from the Sussex ARG. Enkamat is an open weave material which has been used as an escape "ladder" fitted to road drains and other gullypots where amphibians are known to get trapped. With thanks to kind permission from Highways at Solihull Metropolitan Borough Council, we installed amphibian ladders in approximately 20 road drains during March 2015. We then monitored the use of the ladders (as far as possible when time allowed) until October. Frogs were the most commonly found species by far, with small numbers of smooth newt, great crested newt and common toad also seen on the roads or in the gullies.

Following this positive pilot, we installed two of the British Herpetological Society (BHS) ladders in 2016, which have a steel backing to the mesh material and are far more long lasting.  We are very grateful following a successful bid for funding from the ARG UK 100% Fund, to be able to afford to follow the trial up and install a further 22 BHS ladders during spring 2017. A number of local volunteers helped with the project and we will be monitoring the use of the ladders during 2017 and in spring 2018.

We even made the local press! BBC Midlands Today filmed us putting in ladders, and we were on BBC Coventry and Warwickshire radio. 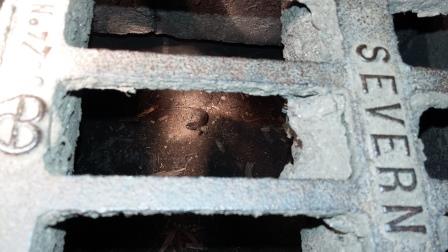