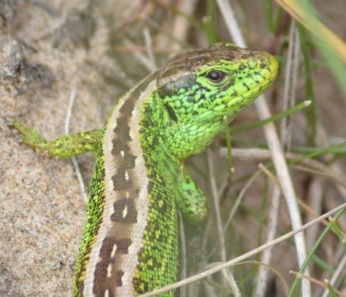 North Merseyside Amphibian and Reptile Group (NMARG) and other ARG UK volunteers are celebrating the successful creation of egg-laying sites especially for the Merseyside sand lizard.

The Merseyside sand lizard is a unique form of this rare and strictly protected species which has very specific egg-laying requirements.   This spring, volunteers have created over 150 sand patches among the dunes of the Sefton Coast.  Initial indications are that the sand lizards have adopted these egg-laying sites very quickly.  At one location where the species has formerly been in decline, NMARG has now found 11 female lizards, many investigating the newly managed sand patches where they will soon lay eggs.

Mike Brown (NMARG Chairman); " This clearly shows that habitat and species monitoring, combined with targeted habitat management, can have positive results in a very short space of time."

Volunteers from the Amphibian and Reptile Group network have been spearheading emergency habitat restoration for the sand lizard on the Sefton Coast over the winter months.  With funding from the British Herpetological Society (BHS) and the ARG UK 100% Fund, volunteers from several ARG groups have joined forces with conservation professionals from ARC and Sefton Council to remove the vegetation that is shading sand lizard habitat.

Monitoring of both habitat condition and the species itself, carried out by NMARG, has allowed prioritisation of management activities which are being addressed through an ever strengthening and successful partnership.

"In spite of the success of the habitat management work, there is a great deal more to do, especially tree and scrub removal and sand patch creation, to ensure the local sand lizard survives and increases in numbers," Mike Brown adds. ARC is currently seeking funds to help local partners with monitoring and managing Sefton's sand lizards. 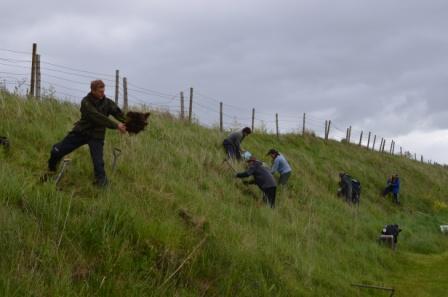