Following the re-launch of the London Amphibian and Reptile Group (London ARG), they invited Natural England to present a seminar on the new District Level Licensing Scheme for the Great Crested Newt. Presented by Rachael Hamilton (Great Crested Newt Strategist) and Craig Thomas (Customer Relations Manager, DLL), this presentation gave an in-depth review of the scheme, how it is being implemented and some early results from Cheshire and Kent.

This annex contains guidance for developers acting under a GCN District Level Licence (‘the Licence’) authorising activities affecting great crested newts Triturus cristatus (GCN), a European Protected Species, which would otherwise be unlawful. Compliance with this guidance is not a requirement or condition of the Licence and is not mandatory.

The Licence permits acts, subject to licence conditions, including killing, injury, disturbance, capture and transport of GCN, as well as damage and destruction of their breeding sites and resting places. Impacts of development progressing under the Licence are being fully compensated for by off-site habitat provision that is being paid for by the developer and for this reason the Licence does not specifically require any on-site avoidance or mitigation measures to be undertaken. However, where desirable, reasonable measures can be undertaken to minimise suffering to any GCN which may be present within or immediately adjacent to the development footprint.

This document is specific to GCN and is only applicable to works proceeding under the Licence. It is important to note there may be other ecological considerations in relation to site works, including the measures identified within this document, for example those relating to other protected or priority species, habitats or designated sites.

pdf The document can be downloaded here (95 KB)

KRAG, our affiliated group in Kent, have released the following position statement, setting out their concerns in response to the NE-led DLL programme in Kent.

document This can be downloaded here. (37 KB)

We've uploaded the latest pdf summary of the status (79 KB) of the GCN DLL roll out from NE. For more information on their GCN DLL package you can download their pdf factsheet here (79 KB) . The background is set out in their  document letter to the LPAs (15 KB) . NE have summarised pdf the present situatinn here (79 KB) .

We have news of a new consortium of organisations testing the approach to great crested newt conservation known as ‘district licensing’. Organised by the Environment Bank, working in the South Midlands in an area running from Oxfordshire in the west to Bedford in the east, the consortium also includes Amphibian and Reptile Conservation, NatureMetrics, a specialist eDNA company, and Associated British Foods, which works with farmers and the food industry. The trial complements work being undertaken by Natural England themselves in Kent, Cheshire and Shropshire, and a third pilot being undertaken by Warwickshire County Council.

To find out more about the NE approach then folder we would refer you to their update .

The new approach focuses on making sure that newt populations are healthy across the whole countryside by providing enough high quality ponds, in a landscape setting of natural meadows and woodland, to ensure that the newts can breed and thrive. The construction and management of ponds and their surroundings will follow the principles developed and tested in the Million Ponds Project and described in The Pond Book and the Amphibian Habitat Management Handbook. With growing numbers, newts should be able to easily spread from place to place – essential for healthy thriving populations – through a network of high quality habitat. In the new approach, rather than trying to protect every existing pond where the animals are found, however poor quality or small the population, the aim is to ensure that the countryside is once again full of clean, unpolluted, ponds with more good quality terrestrial habitat so the animals can once again become common and abundant.

The first stage of this project was to assess the factors affecting the distribution of great crested newts across the project area using environmental DNA survey methods to quickly assess whether newts are present or absent from a large representative sample of sites. Samples were collected during May and June 2017 from sites chosen at random in the project area.

The data collected is being used to make a computer model of newt distribution across the south Midlands to underpin the new newt conservation strategy. On completion of the project the newt records will added to Freshwater Habitats Trust wildlife database, which is open to public access, as part of the project’s overall strategy to be open and publicly accountable.

In subsequent stages of the project during 2017 the consortium will be:

(i) creating a spatial plan that demonstrates an overall net gain in the conservation status of great crested newts (a ‘newt future status’ map), and one that allows determination of a proportionate contribution to that net gain through the licensing of development (‘a guide for developers’ map)

Alongside all the new developments in the Natural England GCN license reforms, ARG UK is supporting one of the key pillars of the process which is to establish the favourable conservation status for the great crested newt. We believe that this is achievable at a county level, and Lee Brady has been refining his model for Kent that combines validated observations with Landscape Habitat Suitability. We would welcome feedback on this, and are open to expanding the model to other areas. For more please visit Lee's recording blog: http://calumma.typepad.com/lee_bradys_recording_blog/2017/03/great-crested-newt-kent-status-assessment-2017.html

A copy of Rob Cameron's presentation setting out the background to the Natural England great crested newt licensing reforms from the 2017 Herpetofauna Workers' Meeting in Nottingham, on 11th February 2017. We have also submitted a list of questions concerning the new district level licensing proposals to Natural England - and will post these as soon as we can.

Today Natural England published a press release setting out an innovative new approach to the conservation of great crested newts across the country.

"District level licensing is an alternative to the site by site great crested newt (GCN) licensing process which has been used for development up till now. It involves district wide survey of the distribution of GCN and assessment of impacts on GCN from all planned development in the district over the whole local plan period. GCN records and other environmental data are used to map zones which indicate where there are highest risks to the local conservation status of GCN and where GCN pose highest risks to development.

Avoidance and mitigation are secured by advice to the Local Authority (LA), based on the mapped zones. The district wide overview of GCN allows development of a conservation strategy which  shows: where it is a priority to retain habitat in green infrastructure corridors as mitigation and improve habitat as compensation for development impacts; and where development can proceed with little or no risk to (or from) GCN.

Compensatory habitat is provided and managed by the LA at strategic locations and at a sufficient scale to address the likely impact of all planned development.  This habitat is established on a time profile ahead of development, before the point at which development could have an impact on GCN. Wherever possible it will be located so that GCN will colonise it by natural dispersal.

Developer participation in district level licensing is voluntary (though in some cases LA’s may vary this approach). Participating development projects would be expected to make a contribution towards the LA’s compensatory habitat, according to the number ponds they may impact upon and the zone that they are in.

The local authority is entitled through an organisational licence from Natural England (NE) to authorise operations which may affect GCN on development sites. This authorisation is provided at the same time as planning permission.

Developers who participate in the pilot will be able to avoid the normal requirement for carrying out GCN surveys on their sites.  Furthermore, as the compensatory habitat will itself ensure a net benefit to GCN and will be populated by natural dispersal, it is intended that developers who participate in the scheme will not be required to trap and translocate GCN from their sites".

Following discussions between 16 of the ARGs located in some of the areas in Britain where there are important strongholds for great crested newts, ARG UK has reached the following position on this:

1. We accept that the current licensing and mitigation system could be improved.  Current practice is driven by an unhelpful legal focus on individual newts rather than the long-term survival of populations and can result in an inefficient use of resources.

2. We welcome the opportunity to revise the existing system and especially the development of a more strategic approach to great crested newt conservation, but fear that central government’s motivation is primarily reducing costs and perceived delays to development.

3. We believe that changes to the system should focus on conservation benefits through the following process, strictly in this order:

4. There should be sufficient resilience in the system to cope with other factors including impacts of climate change, invasive plants/animals and disease.

5. There should be ongoing monitoring, and sufficient flexibility in the system to allow for possible changes in newt distribution over the course of time.

6. We do not believe that eDNA should be the sole means of monitoring, as it cannot provide information on population levels (just presence/absence), and can be unreliable. Monitoring effort needs to be robustly designed to have sufficient power to detect a reasonable change in great crested newt populations.

7. Sufficient safeguards should be put in place to prevent areas that have been used as compensation areas from undergoing land use changes in the long-term future.

8. Safeguards should be in place to prevent funds raised by this scheme being spent on council priorities that do not benefit great crested newt conservation.

9. We believe that it is important to distinguish between pilot projects that test administrative processes and those that test ecological outcomes (the latter are likely to take many years).  This is critical in consideration of extending pilots to other geographic areas and protected species.

pdf This document can be downloaded here: (85 KB) 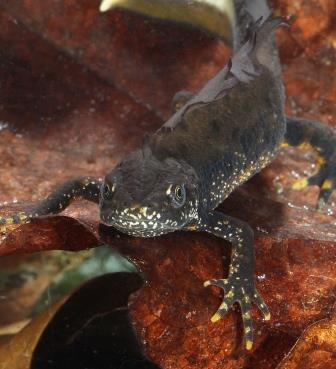